This morning saw the premier performance of the Nativity Play by our Junior Church. No photos I’m afraid, for Child Protection issues, but believe me it was a very moving experience. We had sound effects, parents in their jammies, Postman Pat, crazy shepherds chasing sheep, angels galore, and a most beautiful Mary and Joseph.  You can catch a repeat performance on Christmas eve at 4pm.

A few faithful volunteers stayed behind to decorate the crib and make it Scottish, following our theme this year of contextualising Christmas. Not all the gifts are in place yet, but if you look closely you will see a few Highland coos, Nessie, puffins, a neep, Irn Bru, shortbrea, Lees macaroon bars and Tunnocks teacakes. Forget the gold, incense and myrrh! We know what we like here in Scotland. 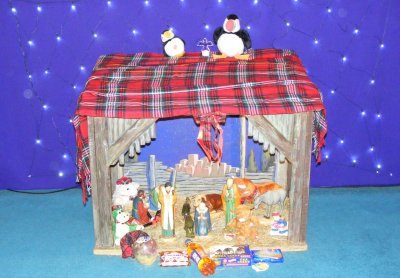 And if you look very closely in the front right corner you might even find a Scottish Caganer!  Following the Catalonian tradition of hiding a little man crouching down have a poo, to show that Christ’s birth affects all humanity, we have followed in that great tradition.  Here he is in glorious close-up…

I see I may have to touch up my paintwork for close-ups!

OK, so you’ve got a bunch of Anglican Bishops and spouses from the far corners of the earth to entertain for a weekend before they head off to Lambeth. What would you do with them? How would you welcome them?  Send them out to parishes seems like a good idea and I heartily agree. Let them get a taste of how we operate here in the Edinburgh Diocese, and give them a flavour of good Scottish hospitality and good Scottish liturgy. And I believe that they all preached in the places they were sent which is jolly nice too. No problems there then.

Then it seems like a good idea to have a Festal Evensong in the Mother Church of the Diocese to send them off filled with the best liturgy and music that Scotland can offer. Good idea, right?  Was that what happened tonight? Was it heck.

First there was the liturgy – that would be the 1929 Scottish Prayer Book evening prayer. (“But we always use that in the Cathedral”) Yes, that’ll show them Scottish Liturgy at its best. The setting of course was Dyson in D – that well known English composer of the early part of the 20th century. The Introit was Stanford’s ‘O for a closer walk’ – Stanford being Irish but brought up in England at the end of the 19th century. The Anthem was Ireland’s ‘Greater love hath no man [sic] than this’ – Ireland being English naturally, and again from the first half of the 20th century. The final hymn was one of my favourites, Thy hand, O God, has guided, but in the original version which mentions ‘fathers’, ‘men’ and ‘man’ several times. Well we must keep the women feeling included and welcome after all. And then, at last we have something modern – Rutter’s Irish Blessing to see them off which was beautiful but not exactly Scottish, followed by the Voluntary by Herbert Brewer and yes, you guessed it, he’s English and long since dead.

So, basically, they have seen the English Church at prayer. The Cantor was English, prayers were by the Provost, readings by the retired Bishop of Jarrow and an English woman. The choir were made up from ‘Choirs of the Diocese’ (ours wasn’t invited, btw!) and not robed, but they did sing well. In fact, it was all beautifully done but just not Scottish or very inclusive or particularly welcoming to the Bishops who only got mentioned in small print on the front of the pew booklet as ‘attended by Lambeth Delegates’.

Grr. Where’s a Suggestion Box when you need one?