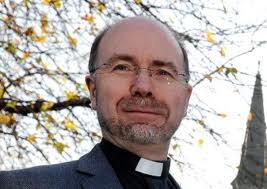 Yesterday in Edinburgh the Very Rev’d Dr John Armes was consecrated and installed as Bishop of Edinburgh. The cathedral was packed full but strangely this did not make it any cosier. (I wonder what it would take to make the cathedral warm?) Clergy in 70 shades of white were squished side by side with no kneeling room and behaved reasonably well, I’d say. (A certain priest from East Lothian won the Hymn Bingo by guessing that we would have All People that on earth do Dwell. )

So what do you want to know about the event? Who was there? Oh the usual suspects. Bishops past, present and Porvu. There were some rather fetching ecumenical guests in exotic vestments and a very red Cardinal. Clergy and lay readers turned out in force, many of whom I’ve never seen in my life before. Ian Barcroft from Glasgow Diocese preached.

Music? Well I have to be careful here just in case these were all +John’s choices. The mass setting was Kodaly’s Missa Brevis which, lovely though it is, wouldn’t have been my choice for such an occasion. St John’s Princes St choir had joined with the Cathedral choir and they all made a jolly nice sound. I especially loved the Durufle Ubi Caritas et amor which I first heard one Holy Week in Mirfield and have adored it ever since. The litany was especially composed by DJ Ferguson in honour of +John and the cantor was Fr Pip but as it was new we couldn’t really join in. (Well there was an attempt but it sort of died out into a kind of low hum.)  After communion we were treated to Jonathan Dove’s Seek Him that maketh the Seven Stars and Stanford’s Te Deum.

After the service was over we all gathered on the lawns in the sun and enjoyed a glass (or bottle in some cases!) of vino and canapes. Actually it was warmer out there than it had been in the cathedral. The best bit was watching all the woman in heels sinking into the damp grass and ending up at an alarming tilt. As ever it was lovely to see many old friends and make some new ones. “Hello, are you Ruth by any chance? I’m ********* and we’re friends on Twitter.”  “Oh how lovely. Now I know what you look like!”

Really it was a lovely day. Very Embra, if you know what I mean. And now we have a new Bishop and he’s coming to us first, I reckon. Well he’s coming next Sunday to do 5 Confirmations. I’ll let you know how he gets on! Let’s hear it for our new Bishop… hip, hip…

I went to choir practice last night. Not to sing per se, but to lurk and learn the new mass setting which will be given an airing on our Patronal Festival this Friday. The Bishop is coming and we want to be at our best.

I liked it. It is in the back of our hymn book (Complete Anglican Hymns Old and New) – No 957 Missa Simplex by Malcolm Archer. If I managed it then everyone else should too. But you know what it’s like with something new…

Something else I noticed… one of my fave hymns is In our Day of Thanksgiving which we used to sing at St Michael and All Saints to the tune St Catherine’s Court. But all the newer hymn books have it to the tune Was Lebet which is easier but not so nice, imho. What do you sing it to?