And then it was Sunday. Church. Which Church? So many to choose from. On the advice of Fr Kelvin, I went to St Mark’s in the Bowry where they are doing exactly what I’d love to do if I had a big enough space and a courageous congregation. Altar in the middle of the church with chairs in circles around it. Really mixed age congregation and lots of Wild Goose music along with some modern inclusive stuff. Kind of jazzy, folky, soul feel to it. Notices at the Peace and I was welcomed and applauded. Some went up to be prayed for because it was birthday, anniversary or someone they knew was sick – just like us at The Pig!  We brought our gifts to the plate on the altar and then stayed standing around the altar for Eucharist. Glorious AMEN sung at the end, gospel style. Relaxed, prayerful, catholic, musical, inclusive, glorious.

G had gone off for a wander while I was at church and met me after and we went to sit in a wee park he’d found where some guys were playing basketball. I sat and wrote pages of my thoughts on the service. A church came by to hand out food to the homeless in the park. One of the homeless women said she had a Glock in her pocket so we took that as our cue to leave. Visited the New Museum which took modern art to the nth degree. G took part in an interactive thing where you put on goggles and you could imagine you were in a rain forest.

Then we crawled to the South St Seaport and sat in a waterfront bar for grub and a drink. The sun was out but it was cold in the shade. Then on to the Water Taxi for a birl round the island again before limping home. Sore foot is improving. Legs are not. Rush hour traffic on a Sunday seems weird. This city really never sleeps. 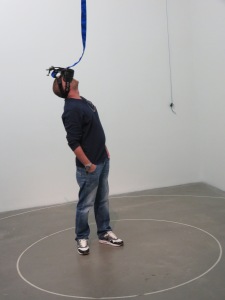 Lazy morning then brunch at our favourite diner. Omelette this time. Really trying to find non-carbs today. Went to the Guggenheim for more culture – $25 worth, in fact. Lovely building designed by Frank Lloyd Wright and that’s about all I can say really. (No photos allowed.) 4 floors of dates on card and numbers on bits of paper and postcards all saying ‘I’m still alive’. Finally found some paintings in a side room and discovered a Picasso that I loved (Woman Ironing). Outside a busker was singing Stevie Wonder songs so we sat and listening for a while. He was the best thing about our visit.

Wandered along 5th Avenue looking at the posh shops and had an expensive coffee. Back to 42nd St and found John’s Pizza place which was recommended in all the guide books. Well worth it. Massive place, massive pizzas, massive drinks. Lots of local people and a great buzz. Then home to pack for tomorrow we leave for Philadelphia.

Heard on the news that the rabid coyote had been caught by the police. Feel kind of sad for the wee critter.

Greyhound bus to Philadelphia which was quiet and took just over an hour. Our house in Dickinson St is in the southside and was lovely inside, very modern with a small roof terrace. Still no kettle. Becoming experts now with strange showers and plugs. Weather has changed and it is now hot and sunny so we decided to just wander through the neighbourhood and find out what’s going on. Bad idea. One street nice, next street scary. No way of knowing which is which. Finally found a main road and grabbed a taxi into town. Lots of graffiti on buildings which is really quite beautiful. Got my nails done by a Chinese girl in a face mask who spoke rarely but communicated by pointing and we got on fine.

Wandered round the shops and then had the obligatory Philly Cheesesteak which seems to be mince on a roll with cheese. Nice. 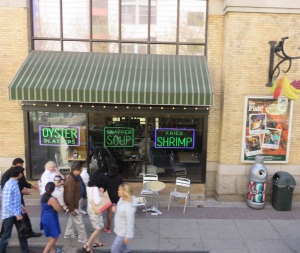 Did the Hop on Hop off Tour bus round Philly. Smaller than NY but some grand buildings and a great sense of history. One road had flags from all the nations that they have a good relationship with – saw the Union Jack as well as Scottish Saltire and Welsh flag. Lunch in the hippy area, sitting out in the sun and leaving half a plateful again. Why, o why?

In the evening we had been invited to Fr Gordon Reid’s for cocktails so jumped in a taxi uptown. Really chatty taxi driver who sang God Bless America for us and on being told he had a great voice, confessed he used to sing with the Delfonics – the Philly Soul group in the 60s/70s. Then he put on his new CD and we all sang along! Now that’s what I call a taxi ride.

Fr G has recently retired as priest at St Clement’s there and once upon a time was Rector of St Michael & All Saints, although I’d never met him because he left before I joined. We have since become Facebook friends so it was good to meet him in the flesh. He has a most beautiful loft apartment in the heart of the city and had some great friends for us to meet. Even G, who had been a tad reluctant to spend the evening with ‘churchy’ folk, met some interesting people. Probably drank too much gin and ate too much smoked salmon but had a wonderful evening. 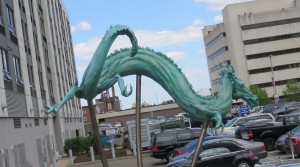 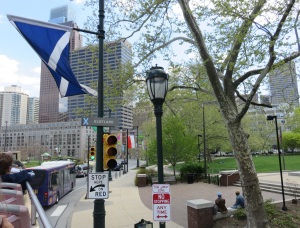 More pancakes. Just to check Philly ones were the same as NY ones, you understand. They are.

A morning in the Philadelphia Museum of Art and found the Tanner Annunciation which I love and love even more now I’ve seen it. The photo of course doesn’t do it justice. Discovered lots of American art which was new to me, as well as a host of Monets (how many paintings did he do?!), Renoir, Cezanne etc. Came out at the top of the Rocky steps and joined everyone in having my photo taken like Sylvester Stallone. No I didn’t run up them first. Really.

On to the Franklin Institute for the Art of the Brick exhibition for G. It was an incredible selection of pieces of art made from Lego. Each one even had how many bricks it had taken to make – tens of thousands in most cases. Fought our way through the thousands of teenagers in school parties too. That was fun.

Wandered back into town to find helicopters hovering around. There was recently a death of a black guy while in police custody in nearby Baltimore and Philly were holding a peaceful protest we found out. One after another police cars arrived and blocked all the streets out of town. We jumped in a taxi, cowards that we are, and couldn’t find a road that wasn’t blocked off. Looked like we were never going to get home but eventually we managed a detour and were happy to pay $13 for his trouble! 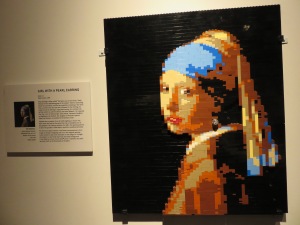 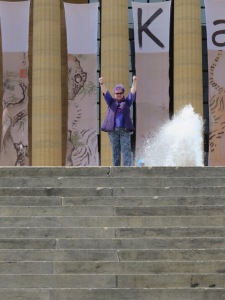