Yes, I bet those are words you never thought you’d hear from my lips. For the past six weeks I have been going to the gym. Gasp!  But not just any gym, oh no. This is a very special gym – a gym for old fat and skinny folk who have lung problems. I was referred by my doc some time ago because I have asthma and COPD (Chronic Obstructive Pulmonary Disease) which gives me lots of chest infections and breathing problems. When the physio suggested that this gym might be a good idea, I laughed. I laughed and laughed and coughed. Me at a gym? And you’re laughing too at the very thought, aren’t you? I can sense it.

I use my car for everything, even driving about half a mile to get to the car park in town when anyone could walk there in minutes. In my defence this is because cold air and wind sets me off coughing and is bad for asthma and being so fat makes it exceedingly hard work. And then it becomes a vicious cycle – fat people don’t walk, right? And waddling is never attractive. But I was assured by the phsyio that there would be other people at the classes in the same boat – we’d all be wheezy, clutching our inhalers, and many would be overweight because of the lack of exercise and overuse of steroids.

So on 4 November I set off for the hospital gym clutching my bottle of water in ‘comfortable clothes and flat shoes’ with more than a little apprehension. The gym part would take up an hour and then we’d have a talk for half-an-hour when the second group would join us and then they’d stay on for the gym when we staggered off to our cars, wobbling on achy legs and wheezing like old crones.  I looked around my group and discovered that I was in fact the only overweight one apart from one man with a big belly which might have been a hernia. (The second group had loads of plump ladies, many of whom brought their own oxygen tanks, which beat any attention seeking I might have been planning.) My group was full of painfully thin old women with deep husky voices and smokers’ coughs. I was the youngest by about 20 years. We were nervous and shy with each other and very unsure of what this gym was going to entail.

Ruth the Physio had us sit in a circle for warm-up first. Tapping toes, stretching lunges, rolling of heads and marching on the spot and we all joined in awkwardly. This was all accompanied by disco music (which I will never hear again without starting the warm-up routine) and soon we learned who had rhythm and who did not. We also discovered that some just couldn’t do the exercises on the spot but traversed across the circle. Nobody got smacked in the gob which was a miracle really. After warm-up, we were shown the 14 exercises we would be expected to do each session: lifting weights; cycling; squats; steps; treadmill; wall presses; goalie (the most embarrassing one where you stand with your back against a wall, crouch and put your hands on your knees and then stretch out to the right as if catching a ball, back to knees, and then repeat to the left sliding up and down the wall as you go); etc. We were to begin with 10 of each and 2 mins on bike and treadmill and mark them on our sheet. On duty were Ruth the Physio and a scary pulmonary nurse who kept an eye out for bad wheezing and were ready to gently encourage us.

I began the 12 sessions with the remnant of a bad chest infection and was coughing like a dirty old woman. Several times I had to stop and have a good old cough and splutter and that’s when I learned that exercise is good for getting phlegm up. Yes, phlegm. A revolting word for something which we all get from time to time. I feel as if I am now an expert on the wretched stuff. But by the end of the first session I had managed all 14 exercises and had time to sit down and wheeze before our hour was up. I had quite a sense of achievement.

Then two days later we had to do it all over again but this time we had to increase the exercises a bit. We tentatively spoke to one another getting to know what our health problems were, and helped one another figure out how the bike worked and how to lower the seat. We stopped being quite so embarrassed about swinging our arms and sitting down and standing up at the same time. We learned that some of the weights and poles were heavier than others and all opted for the lightest ones. We learned that Jessie was too scared to go on the treadmill and preferred to walk up and down the gym floor. We encouraged one another, asking how long we’d managed to cycle for, and comparing heart rates.

The talks were all different and aimed at our health problems, and some were more useful than others. We learned about 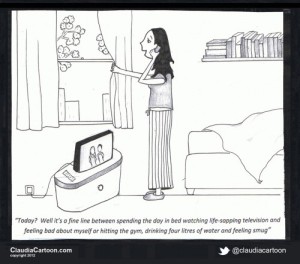 our lungs and how they work or don’t; about diet and stopping smoking; about benefits and deep breathing; about exercise and relaxation. We took home DVDs with Angela Rippon encouraging us to exercise from our armchairs and CDs with a man speaking gently to us encouraging us to chill out. (No, I have never played the DVD nor listened to the CD but that will come as no surprise to you.)

After my first session at the gym I had an appointment in another part of the hospital for a check-up for my liver. I have something called PBC (Primary Billiary Cirrhosis) which was picked up in a blood test 5 years ago and for which I take four enormous pills every day and mostly ignore except for annual blood tests. But at this appointment I had a new kind of scan and found out that my old liver is not very wobbly at all. Wobbly livers are good, it would seem. Mine was like a lump of tough old gristly liver and riddled with fat. This is serious, you have NAFD said nice consultant. (I think this is Non Alcoholic Fatty Disease – NON Alcoholic, please note!) You must lose 4 stone. 4 stone! Just like that. (Not before time, I may add, but it still came as a bit of a shock.) However, it did seem fortuitous that I should be going to the gym at the same time as starting the radical diet.

And now here we are in my last week of hospital gym approaching my 12th session. I now cycle 10 mins and stride out on the treadmill with a gradient too! My cough has all but gone and I have lost 9 lbs. On Thursday at our last session I will be filmed for some new promotional material to encourage others to try the gym, and even heard myself saying yes to an introduction to the local gym where I’ll get a discount and can go exercise with the big boys and girls. I know! Who’d have thunk it?

I’ve made some friends too and you will be delighted to know Jessie now toddles along on the treadmill, Mary had her cataracts done and it was a great success, and Roberta is worried that it might not be a happy Christmas for her. And I can run up the stairs of the rectory and now speak when I reach the top. And I can walk into town, albeit with a scarf over my mouth, without having to stop several times and lean on the wall. Result!

And that, dear reader, is why I haven’t had time to blog for the past six weeks. It has taken quite a chunk out of my diary and I’ve had to work extra hard to catch up at this busy time of year. Will I go on to the ‘real’ gym? Who knows? Watch this space.

10 thoughts on “In which Ruth goes to the gym”