In all the churches I’ve been rector, I’ve led silent retreats. They have never been over-subscribed but usually appreciated by the dozen or so who do attend. Even those who have never been silent before often become devotees and persuade others that they should try it. Readers will know that I myself struggle greatly with silent retreats. There are probably more blogs about my catastrophes than any other topic and I invite you to go seek them if you want a laugh. However, I do find that leading them is not quite so difficult for me – probably because I get to speak and listen and have enough in the organising to keep me busy.

Since I’ve been at Christ Church many have said that they wouldn’t come on a silent retreat and that’s fine (and quite understandable). And often the feedback after a retreat is that people just wished they had got to know one another better. Mind you, I think you can find out a lot about folk watching them in silence but that’s another topic… So this weekend we had a Parish Weekend. Not a retreat. Not silent. Just a weekend for us to get to know one another, enjoy conversations, and have fun. Hopefully.

We went back to Whitchester Christian Guest House just outside Hawick because they are trying to encourage more visitors and it is a lovely house. A bit too close to nature for my liking but I know others like that sort of thing. I’d planned to go from Friday afternoon to Sunday afternoon so that any who worked could join us. The majority were probably in the 70-80 age group but that was offset with one family with 3 year-old Eleanor. I’d planned on worship morning and night, and took along some crafts for those who didn’t want to go out hiking or whatever folk do when they go off into nature.

Unfortunately it rained all day on Saturday and although some did go out (mostly looking at overpriced cashmere) the rest of us learned how to do encaustic art and produced some masterpieces. We also made our own labyrinth which took up most of the day but everybody painted at least one leaf on the fabric. It can now be used in our own church – or if you would like to borrow a 12′ square labyrinth, do let me know. 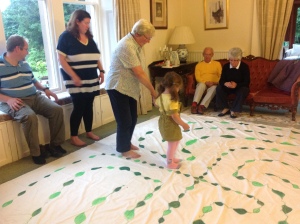 Worship didn’t go as well as I’d planned because I’d printed the booklets incorrectly. Page 1 was at the beginning and the correct way up, but Page 2 was at the back of the book and upside down, and so on. It was a test of ingenuity and caused some pauses in unexpected places as some shuffled back and forth with puzzled expressions. On Sunday we had a Eucharist to remember the beginning of WW1 and everyone was invited to bring a flower from the garden and lay it on the altar. (We’d pretty much got the hang of the booklet by then!) 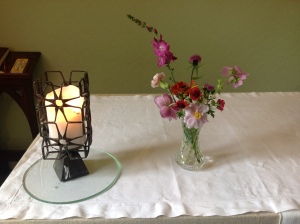 The only problem was nature, and I feel just a little smug about this. Breakfast was delayed by some time while the staff leapt around the dining room with a net trying to catch the two bats who had swooped in. At night they were back and forth like busy bees and this rector certainly did no wandering about outside after dusk.

We had a lot of laughs and did indeed learn more about one another. Perhaps every alternate year we ought to forgo the silence and just have fun instead.