When I was a theological student I did an attachment in Homerton Hospital in Hackney, London. It was 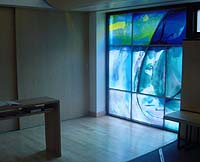 quite a modern hospital and one of the first to have a purpose-built multi-faith Chaplaincy Centre. Of course in the old days it would just be called a Chapel, but I suppose that implies that everyone who uses it is Christian. In that part of London the rooms were mostly used by Muslims and Hasidic Jews. I remember it being gorgeous modern stained glass, modern lines and no atmosphere whatsoever.  I can’t remember the name of the nearby hospital which we visited one day but it was very Victorian and had a traditional chapel with candles to light and a statue of the BVM. I was told that none of the Muslims complained about any of it, they just faced east (with their backs to Mary) and did their thing.

Recently I was in the Royal Jubilee Hospital in Clydebank. On the way home I saw the sign for the Chaplaincy Centre and popped in for a wee nosey. The Chaplain was just coming out of his office to go for lunch but stopped to speak to us and offered us a guided tour. The focus seems to be less on religion and more on comfy sofas and armchairs. There was one dark room with an altar but I don’t think there was a cross. The Muslims had their own dedicated space. It all just seemed rather bland. And I really didn’t get a feeling of prayer at all. But that could say more about me, I’m afraid.

Today I was visiting someone in the Forth Valley Royal hospital so I thought I’d pop in to the Chapel there to say a wee prayer. I wasn’t sure if I’d been in before but it didn’t look familiar so I guess not. Again it was dimly lit and there was an altar with a bible on it and some artificial flowers. In fact there was not a ledge or window sill or wee table that didn’t have some plastic flowers on them. And pebbles. Many, many pebbles. Pebbles in bowls. Pebbles on scarves. Somewhere there is a beach bereft of its pebbles. In the dim room there were lots of little circles of chairs round a wee coffee table (with pebbles or flowers, or both). It felt a bit strange to sit at one of those wee circles on your own. There was a man in there putting his shoes on who left quickly. I think he’d been saying his prayers in the corner. There was also a lovely banner in memory of the children killed in Dunblane and Books of Remembrance which I think must be for stillbirths etc. (The photo shows a candle but I didn’t see one anywhere.)

But I’ve come away feeling a bit unsettled. None of these places felt like places I’d want to go to for spiritual sustenance. I didn’t feel the presence of God in any of them, except perhaps the old-fashioned one in London which has probably been ‘modernised’ by now. Would soft music have helped? Some candles to light? The smell of fresh flowers? More books to read? Icons? The Reserved Sacrament? Or would they all offend people of other faiths? But even when the chapel did have a special room for Muslims they chapel was still very bland. Surely even people with no faith would expect to see religious symbols in a chapel, whether they believed in them or not.

What do you think?

8 thoughts on “In which Ruth ponders Hospital Chaplaincy Centres…”